Getting the Appointment Sales 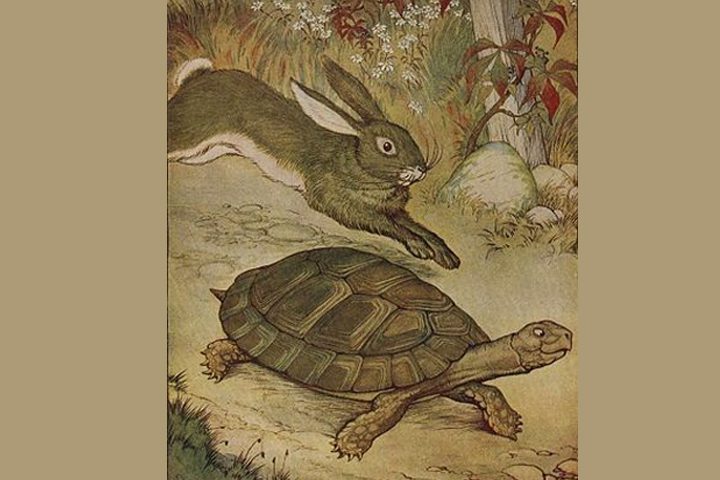 When getting your team ready for the challenges ahead, the classic tale of “The Tortoise and the Hare” might be the last thing on the mind of sales leaders. How could this children’s story provide any insight before heading off into the field? As a salesperson, you know it’s imperative to quickly and effectively find new ways to continuously reach, convey and deliver value while working in a fast-paced environment. Yet, there’s also an undeniable benefit that can be gained by a tortoise’s slow and well-planned strategy, especially when it comes to moving beyond one’s everyday thinking – and doing what it takes to land the big deals and maximize one’s full potential. As you’ll see, there’s quite a bit that can be learned from the well-known story of “The Tortoise and the Hare” as it relates to the bigger lessons of the sales world.

Although the tortoise would tell you that slow and steady wins the race, learning from the hare’s shortcomings sends a strong message: there is always a better way forward than to hurry to the finish line – without an effective game plan.

Being the tortoise and the hare

There is perpetual pressure to move faster in sales environments, but team members will rarely be told to do the opposite. The fast-paced nature can cause salespeople to bounce from moving in overdrive to feeling burned out and unmotivated. The lagging mindset leads to productivity loss while “snapping out of it” and hastily making rushed decisions can be equally counter-productive.

There is a clear balance between patiently forming a calculated strategy and wasting no time in executing the moves. Even if the best salesperson can capture twenty new leads, they can all be lost if he/she takes a page from the hare’s playbook and follows up without doing meticulous research. And if the leads are lost, the salesperson with a 25% conversion rate on four leads will still be ahead – in other words, like the tortoise, they will win the race despite traveling slower than the hare.

Sales is clearly a game of numbers, but each number must be handled with care. The digital age has made information readily available, and salespeople must take advantage of it and move efficiently and strike while the iron is hot.

The cost of clearance

Long-term goals are too often sacrificed for short-term gains when in the thick of the storm and facing looming deadlines. The same tools used to motivate team members can have unintended consequences.

A salesperson can make too many compromises to inflate their individual numbers while forgetting that they may be doing so at the company’s expense. They may tip the scale too far in the hare’s direction and close every possible lead across the board by offering generous discounts just so they can finish the race first. Little do they realize they make these gains at the cost of hindering future efforts once the deadline has passed.

When sales outpace themselves

Deadlines – quarterly, annually, or otherwise – are meant to serve as checkpoints rather than finish lines. When sales members literally sell themselves short for a bigger payoff tomorrow, they are cheating themselves out of a more promising reward in the future. Even worse, multiple salespeople working under the same line of thinking will mean bad news for the company once revenue is forgone for the sake of misaligned incentives.

There is no better example of when to put the tortoise’s philosophy into play. Instead of sprinting ahead to steal a quick lead, he stayed in the hare’s shadow until the end, knowing that he would eventually take the top spot. All that matters is who is in the first place when the race is over.

Even if your sales team struggles to find equilibrium between the approaches of the tortoise and the hare, the imbalance can be easily remedied. Effective communication is the key to maintaining collaboration between any team. Maybe team members have never even considered they could be jumping the gun before leads have been properly nurtured.

If you openly communicate the big picture goals to team members, they will react accordingly. Sales, by nature, is a highly methodical practice. When given a goal, salespeople relentlessly map out a resourceful strategy to achieve it. As long as those goals are made transparent and without confusion, the entire organization can work in harmony.

The optimal sales style incorporates a blend of the tortoise and the hare. Team members should learn from the tortoise when carefully plotting their next moves, yet follow the hare’s example and move swiftly at the opportune moment. The salespeople who are able to strike the right balance between not wasting time—and not being caught unprepared—are the ones who are consistently most successful.

Ensure an Efficient Sales Acceleration Process with These Few Tips